There are several leaps of faith in their conclusions. Does longer duration necessarily imply greater chance of paternity? Also, if sperm competition is at the root of all of this then I’m not sure post coital cunilingus is really ever an adaptive strategy: consuming your own sperm hardly seems like the best method of impregnating your mate. Yes, I’m still talking about bats here, what you choose to do in your own free time is none of my business.

We’re going to use R, if you don’t know how to use it then some imbecile called AndyField has written a book on it that you could look at. We can input these approximate scores as:

Ok, so that’s the three variables entered, and I’ve made a data frame from them called bat.

Let’s load some packages that will be useful (if you don’t have them installed then install them) and source Rand Wilcox’s very helpful robust functions:

Let’s draw some rough replicas of Figures 1 and 2 from the paper: 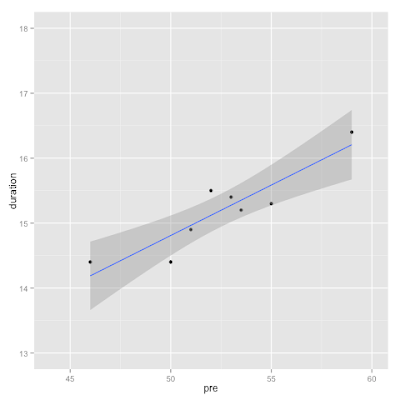 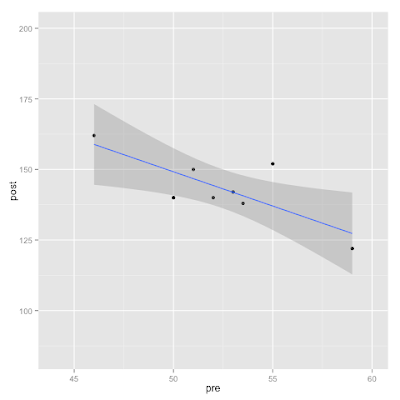 If I’m right and the data in Figure 2 are affected by the first and last case, we’d expect something different to happen if we calculate the correlation based on ranked scores (i.e. Spearman’s rho). Let’s try it:

What about if we try a robust correlation such as the percentile bend correlation described by Wilcox (2012)? Having sourced Wilcox’s functions we can do this easily enough by executing:

The pre-duration correlation fares much better:

This is still very strong and significant, r = .85 (p = .007). We could also try to estimate the population value of these two relationships by computing a robust confidence interval using bootstrapping. We'll stick with Pearson r seeing as that's the estimate that they used in the paper but you could try this with the other measures if you like:

If we look at the BCa intervals, we get this for the pre-post correlation:

and this for the pre-duration correlation:

What does this tell us? Well, I’m primarily interested in using this as a demonstration of why it’s important to look at your data and to employ robust tests. I’m not trying to knock the research. Of course, in the process I am, inevitably, sort of knocking it. So, I think there are three messages here: